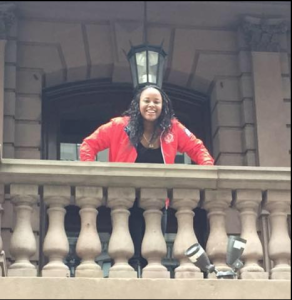 We are very proud to announce that Ms. Dominique Nute, a Cherry Scholar in 2003 and 2004, is among a very small group of teachers to win the Big Apple teaching award in New York City.   The award, presented annually by the NYC Department of Education, “is a citywide recognition program that celebrates the educators of New York City who inspire students, model great teaching, and enrich their school communities.” Last year over 4000 teachers were nominated for this honor with only seventeen being recognized as award winners.

Ms. Nute currently teaches 6th grade math at the One World Middle School in Bronx, New York. Previously, she has taught at the KIPP Rise Academy in Newark, New Jersey, and she was a member of Teach for America’s 2007 New York Corps. She is also a recent participant in the Teachers College of Columbia University “Summer Principals Academy NYC.   The Warren Cherry Scholarship Fund is very gratified to see its investment in this ETHS graduate pay such rich rewards to the next generation of learners in the Big Apple.